Okay, so the new issue of re:VOX didn’t come out in the summer as suggested here previously, that much you’ll have gathered. In truth I was very reluctant to pull myself away from work on From Cents to Pence, especially after being invited to meet former British Marvel editor Peta Skingley. A very enjoyable lunchtime chinwag was had by all, enhanced by the presence of Alan Murray, whom Peta had actually employed as their studio manager shortly after her arrival at Marvel HQ in 1973 (then located in a small part of the Transworld UK Ltd. offices down at High Holborn). This single meeting alone generated some significant new information that then needed further research and clarification, the result being that I couldn't start serious work on re:VOX until a suitable breathing space made itself apparent, which didn’t happen until late October.


Our stunning cover was actually gifted to us at the very last minute by Lowri-Ann Richards, a David Levine photo currently used by special permission on all the material promoting LA’s new show Whatever Happened to La La Shockette, which will soon to be staged again at the Sanctum Soho Hotel off Regent Street on January 23-25th and 30th, concluding on February 1st and 2nd (tickets will soon be made available via wegottickets.com). As the final element of the issue to be completed, this final design superseded the last of several, quite different earlier versions of the cover. At some point we’ll have to share with you some of these previously unseen alternate, might-have-been covers that were dropped from editions over the past decade. 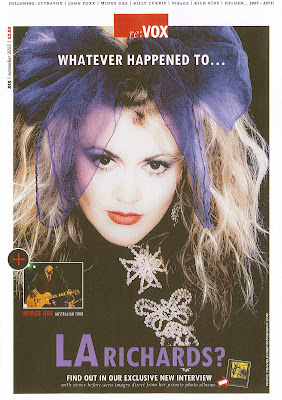 Thanks to LA’s generosity, we’ve been blessed with the pick of photos from 1979 through to the late 1980s, and we're proud to present manyamazing, previously unseen images. It was an absorbing and exciting honour leafing working out how best to compile them in a way that we hope does them full justice. And what a fascinating snapshot into a time when Lemmy from Motorhead could be seen rubbing shoulders with other leading lights of the club scene from Spandau Ballet to LA’s own group, Shock. The sheer scope of this incredible archive has made this feature the longest single interview we’ve ever run, once again pushing the issue to a whopping 44 pages!


But although #19 centres around the life and career of LA Richards to date, there are other treats be savoured too. Australian-based designer Toni Hearn presents two complementary reviews of Midge Ure’s tour over there back in the spring (along with some of her own photos), while our other guest writers Anna Butkiewicz, Darren Hackett and Andrew Watson review three more dates from last year’s Brilliant tour. P/S inaugurates a new, possibly irregular feature looking at some of the more unusual or rarely seen covers that have graced records connected to Ultravox over the years. A stand-alone album of Brilliant tour photos will now appear in one of next year's issues, forming part of a year-long celebration of 40 years of Ultravox(!).


You can purchase copies of re:VOX from #1 to this latest edition (now being mailed out), so do check-out the cover gallery on Facebook via the link below, and then contact us direct at: a_distant_beacon@ymail.com stating the issues that you’re interested in (payments can be made via Paypal now).


I look forward to hearing from you soon - you won’t regret it!
Posted by Rob Kirby at 10:16 No comments: