Since 1990, or thereabouts, I've been working on a book about Marvel's own line of British comics, as still published today by Panini. It didn't start out as a book at all. I was just trying to find out what stories hadn't been reprinted in the UK - besides the obvious lack of Western, War or Romance stories - so that I could purchase those issues that interested me. One rather large pile of notes later, I realised I had far, far too much material just for a personal want's list, and so decide to turn it into the UK version of those wonderful George Olshevsky Marvel guide books.

There was precious little material out there on the history of the company back then, and not much more on USA Marvel's history in the days before (the greatly missed) Comic Book Artist, Alter Ego and Back Issue et al. Repeated attempts to expand a sketched out skeleton chronology, well, repeatedly faltered. That was until I took a look back through a few boxes of old fanzines and comics magazines I'd hung on to, and discovered that I'd had some useful slivers of background material sitting there all the time. With this as a foundation, and with various comics folk spurring me on to delve deeper, I began writing to various US comics magazines, and started to receive replies from creators and editorial folk who'd previously worked on the UK comics on both sides of the Atlantic.

The growth of the internet, and the introduction of e-mail, greatly accelerated this, and I've been very fortunate to have spoken to a whole host of people right across the creative spectrum. The result of all this effort is that the history part of the book, which eventually settled with the title "From Cents to Pence!", now far exceeds the number of pages occupied by the indices that started the whole perishing thing off!


For various reasons, it's taken a little longer than I anticipated to come to a point where I can finally tie everything together (as far as you ever can with a reference work), but the advantage of this was that I finally managed to get in touch with the one person whose role in the story of Marvel UK's earliest days has never been told - Ray Wergan. What he had to tell me (and the level of detail was quite astonishing) far exceeding what I'd long hoped for, entailling a hefty re-write and expansion of what I'd managed to put together thus far on his involvement.

It wasn't so much that what I had written previously was wrong, it's just that there was so much more to it than that, and there were other factors which actually connect a lot of seemingly disparate events, on both sides of the Atlantic, together... but I'm telling you all the plot!

The icing on that cake came while doing some additional research (into a few specifics of elements that had surfaced through my conversations with Ray) when I stumbled across an on-line inventory for the Stan Lee archive at Wyoming University. It's an amazing treasure trove of material that I've only scratched for my immediate purposes, although I've just learnt that Danny Fingeroth (who also figures strongly in "From Cents to Pence!") has also made very good use of other parts of this archive for his own, recently published (by TwoMorrows), Marvel-ous book "The Stan Lee Universe". 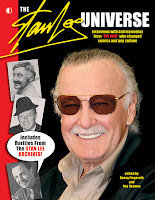 Over the rest of this year I will be continuing to assemble, and then re-design, all the final material that I need to insert at the appropriate junctures in-between working on some of the other projects you will be reading all about on these pages. In the meantime, Back Issue will be running a little something from the book early next year :)

It's going to be a hectic, but very enjoyable, year ahead!

I'll try to keep you updated whenever there's something a little more concrete that I can tell you.

Back when I started re:VOX Ultravox, in it's third and fourth incarnations, had long gone. No one would have ever dreamed that the 'classic' 1980s iteration of the band would ever meet in the same room again, let along go on tour - twice! - and then almost as quickly dive into the studio. I've admitted before now that I wasn't one of those waiting for such a day, as it seemed such a remote and unlikely outcome. More fool me :)

So here we are, some eighteen years after Lament - their final album with Warren Cann keeping the beat sweet - with the long-awaited news of the first Ultravox album since Ingenuity. I had to gasp, though, when the press release whizzed across the world at 10am BST today. Calling the album Brilliant is an extremely self-confident statement. They've obviously enjoyed making it - the tweets and Facebook posts attest to that - but, and there is a but, that title is going to be such an irresistable target  for those who still have an axe to grind at the mere mention of the U-word.

But now isn't the time to worry about that. Once this blog has posted I have a new issue of re:VOX to assemble. I know, it's been a long time coming, but it will be worth the wait, and we have some exclusive interviews once more, with more to follow over the months to come, and I have some big plans for the magazine. Keep watching the blog and the re:VOX Facebook page for more info as, and when, I get time to post it!

I'm not going to wish the time away until the end of May - it'll go quickly enough with everything else going on here right now. Let's savour a little anticipation. We've waited this long to discover the results of the sessions, a few more weeks won't hurt :)

Brilliant!
Posted by Rob Kirby at 12:41 No comments:

You'll now find a set of links below that will send you across to a whole set of pages on Facebook now in the works. I'll gradually start adding some basic content to each page over the next few weeks, and very much welcome comment and suggestions for anything you feel I should include.