Marvel UK - the 'invasion' of Back Issue magazine!

Although I provided an overview of my work on a reference book about Marvel UK back in March 2012 (A Distant Beacon blog - March 2012), with the sudden announcement of the release date for a hotly anticipated new album by Ultravox I then found most of the rest of the year was taken up with the release of no less than four editions of my magazine (re:VOX). In all honesty was probably one issue too many to fully cope with, but a topical magazine will always have to respond to the times its published in, and that was one rollercoaster ride of a year we were never going to miss! 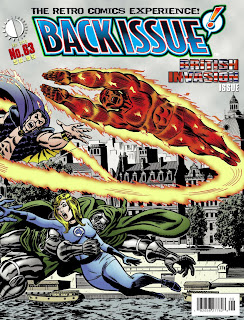 All this activity naturally meant that something had to give, and so work on From Cents to Pence ground to a halt. Fortunately, when Michael Eury from Back Issue magazine requested an article outlining the (surprisingly complicated) history and development of Marvel's own line of British comics to head up a special "British Invasion"-themed edition, there was just time to write one for #63 before switching tracks.

A year later, and this will be shortly available in comic stores this spring. I'm thrilled to have been given an opportunity to share a tiny portion of my work with a larger audience for the first time. They've done an outstanding job on the feature, and I'm very much looking forward to seeing all the other British-related goodies they've come up with. You can advance order a copy directly from (Twomorrows) own web site right now.
Posted by Rob Kirby at 11:55